This I know: I can write scintillating copy, strategise and help bring a brand to market in memorable ways with 30 months of experience; I can also do PCR and sequence DNA if necessary (that's 7 years of experience); I can read an epigraph with some difficulty, operate a microscope, teach a classroom practically anything (given I've taught French, Sanskrit epigraphy, the taxonomy of ants, Danish colonial possessions in South Asia, and copywriting). I aim is to be a poet-novelist of some Nobelity, to be creative director in a decent firm, and to be remembered with tears centuries from now.

I think I am funny, but friends vehemently disagree.

In a nutshell: writing anything, imagining, epigraphy, DNA sequencing... doing what I effing please**

Molecular analyses of microbial diversity associated with the Lonar soda lake in India: an impact crater in a basalt area | also here, here

Lecture on Grantha Script at Centre for Extra-Mural Studies, University of Mumbai

Will the Indian Ocean ever truly be India’s Ocean? (Prospects for the future of India’s maritime legacy)

Pallankuzhi at Indian Review
You at RaedLeaf Poetry
Motherless Andhadi at Cerebration
Rain Raga in collaboration with Angelee Deodhar at The song is...
mary jane - snow white super girl at Fictionaut
Saudade #1, The Solitary Reaper, Children's Books, Commas, Opening into the darkness, yellow, still waters, The Return of the Native, Flying Scotsman, at Whispers in the Wind
Pearls at S Balachandra Rao's blog
Saluva Timma, Mahamandaleshwara at Indian Periodical
War is Necessary at GloMag
Mumbai; The city won't stop for him; and They've put tin sheets around my house at Kritya
Fear Ye by Oxford Book Store (no longer online)

Haikai and Tanka in Print:

One haiku published in Proceedings of the Two-Day International Conference and Utsav on Contemporary Haiku (Distilled Images) organised by The Department of English, SIES College of Arts, Science & Commerce in collaboration with IN haiku 13-14 September, 2014

the taste of sea breeze: An anthology of haiku, senryu, haibun, renku, tanka and renbun

Mother's Parijata Tree
Why I Write
Languages I know
Why Mothers Can’t Grow Bonsai Trees
On Tiffins: Preface to GloMag, September 2016
Indian Parenting 101 (and why my parents failed it)
Idli Vs Aloo-da-parantha
Adventures in Nine Languages

The Zamindar's Footprint at Indian Periodical

All and Nothing by Raksha Bharadia
Archaeogiri by Shubha Khandekar

Distilled Images: A Conference and Utsav on Contemporary Haiku

Mentions in the media:

The Tweeting Haijin - my haikai blog
Autophony - my poetry blog
The Reckless Sonneteer - my 'sonnets'
GLO-TALK - collaborative blog with Glory Sasikala
Maxvani - in honour of the late Max Babi
The Great And The Glubby - where mail forwards go to die
Yakṣapraśnāḥ - quiz blog (defunct; will hand over to whoever is interested)

Cafe Haiku - maintained on behalf of IN haiku Mumbai 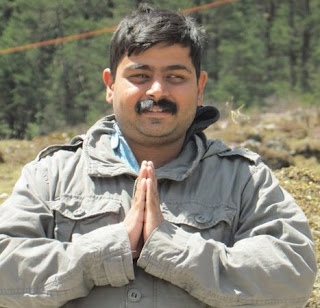 *since fulfilled at the Amaravati Poetic Prism 2016 with a somewhat expensive shawl presented by a surly Nara Chandrababu Naidu.
**with the constraints of money, family bonds, asthmatic lungs, and inescapable laziness.

Popular posts from this blog